Aaron Cheak is one of the most exciting scholars working on the field of alchemy, comparative religion and Western esotericism at the present moment. He is an expert on the work of René Schwaller de Lubicz, one of the last great hermetical philosophers. In conversation with Alejandro Martínez Gallardo, Aaron discusses the work of Schwaller de Lubicz, the mystery of the fixed salt of consciousness and his theory of the evolution of consciousness in the kingdoms of nature (where matter is an instrument for spirit’s path back to itself). They also trace interesting parallels in Daoist and Hermetic alchemy, the shortcomings of the scientific worldview, silence as a mystical path, uncovering the buddhanature within, space as primordial consciousness, the relationship of the inner and the outer, or mind and sky, as hinted by a line from Rilke (What is innerness, if not intensified sky) and as understood by Dzogchen and Mahamudra, where the sky is the preferred metaphor for mind (the unity of emptiness and awareness).

Alchemy may be described, in the words of Baudelaire, as a process of ‘distilling the eternal from the transient’. As the art of transmutation par excellence, the classical applications of alchemy have always been twofold: chrysopoeia and apotheosis (gold-making and god-making)—the perfection of metals and mortals. In seeking to turn ‘poison into wine’, alchemy, like tantra, engages material existence—often at its most dissolute or corruptible—in order to transform it into a vehicle of liberation. Like theurgy, it seeks not only personal liberation—the redemption of the soul from the cycles of generation and corruption—but also the liberation (or perfection) of nature herself through participation in the cosmic demiurgy. In its highest sense, therefore, alchemy conforms to what Lurianic kabbalists would call tikkun, the restoration of the world.

This restoration of the world is more than a a creative action or a great striving it is just a recognition of the basic nature, seeing reality as it is through the cleansing of perception –in Schwaller’s terms, alchemy is a metaphysics of perception, where the philosophical stone is the (realization of the) constancy of cosmogenesis and eternity is this present moment. «We have this progressive idea of spirituality where we think that we need to take steps to attain a higher thing. Actually, we just need to get ourselves out of the way so that the primordial nature shines through, we need to dismantle ourselves in order for that primordial sun to reveal itself», says Aaron in the interview.

We have transcribed some of the highlights of the first part, in the next couple of  weeks we will publish the second part of the transcript.

The Indestructible Ash and the Inscription of Consciousness in the Bones

When you burn something you get ashes as residue, but ashes are interesting because you can’t burn them, you can’t destroy ashes, they are  the leftover of a process of destruction, whether it is combustion or putrefaction.

These destructive processes destroy everything but this mineral residue. So in a purely physical sense they are indestructible, they are immortal. Even if you look at this at the level of modern scientific cosmogenesis, the mineral elements are really the fundamental building blocks of all Creation. So in a sense Schwaller’s whole theory of evolution comes from this idea that all life as we know it emerges from this raw mineral layer of being.

So this is the idea that everything that we know as life and evolution is contained in the mineral seed, and the mineral contains a kind of consciousness which over time is expressed or evolves in the plant kingdom or animal kingdom and so on. Ultimately, there is a sense that there is a consciousness in the mineral nature that is really the rock fundament of all existence and on an individual level what this means, according to Schwaller, is that it preserves our consciousness, but it is not the everyday experience and so on… It’s only the most important experiences. There are certain kinds of experiences that penetrate to the bones. You can feel them in your bones. If you can’t feel them that deeply they are not going to survive and this is the kind of level that he was talking about.

For Schwaller that was the initiatory world one should be focusing on; cultivating the kind of experiences that go deep enough in the mineral residue of your bones. This is hugely profound. [And this consciousness written in the bones] survives the death of the body and will be recycled and will reenter the cycles of nature, which in a sense is a sort of mechanism of palingenesis or rebirth or reincarnation. Because the consciousness that is preserved in this mineral residue finds another means. Schwaller would say it joins up with a biological cell or seed and gets assimilated into biological beings and somehow finds its way to an incarnate expression. Matter as vehicle for the evolution of spirit

The mineral kingdom is the rock fundament of all life… Sri Aurobindo put this really well when he said «matter is veiled life, life is veiled mind, and mind is veiled spirit». So there is this idea that even the mineral layer of existence contains or hides life, so it is living in a secret sense. But life itself contains or hides mind or consciousness and that itself is a vehicle or veil for spirit. So we have all these vehicles or veils for spirit moving through the kingdoms of nature.

So you get the sense that existence as we know it is evolving through this grand phases that we know as the kingdoms of nature but at the same time every stages is ever-present, so we don’t eliminate the mineral stage just because we are at the animal or the human stage, all of these are ever-present continuums.

What is interesting with Schwaller is that it seems that we are evolving to a finality, but he actually says that this whole process that looks like evolution is merely an appearance. Because his whole philosophy was that this primordial being, what he called the Anthropocosmos, this perfect entity that is everything, exists as a whole before what we know as evolution emerges and appears to unfold. Paradoxically this Anthropocosmos is also the finality or end-product that evolution seems to move towards. This is the Alpha and Omega, the beginning and end, which evolution seems to be a sort of chain between. 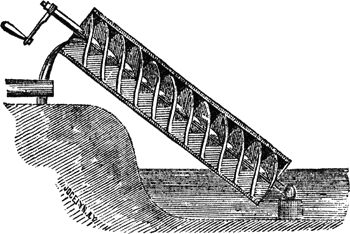 Schwaller mentions the Archimedean Screw, and this made me think of this phenomenon. So if you hold a screw in your hand and you turn it, it looks like the thread of the screw is growing or extending, it just looks like it is but it is not. The screw is the same length, it is not growing forward or back,  it just appears to be growing.

This goes back to Platonic metaphysics and even Parmenides, the idea that everything just is, unmoving,  but there is this appearance of movement and change. And Plato’s Timaeus talks about the act of this primordial divinity which is a revolution upon itself, so it stays the same but it moves upon its own axis in a way. So there are all these resonances.

Creation as an ever-present moment

Schwaller talks about the constancy of cosmogenesis. So this assumes that time is not the linear construct that we are used to conceive the world  through. It means there is an eternity which is ever-present, so the origins of things as they are, are present to us, and at the time the ultimtate fruit of things and all the processes in between are to some degree available to us in a constant presence. It forces you out of models of time and space we are used to operating on a day to day basis.

On the interpretation of alchemy as material or merely psychological

I felt this was a false dichotomy, I’ve found that alchemy, the more I looked at it, has a very material concrete aspect but also has a metaphysical aspect. And to separate them was to miss the point. And this has to do with what I said before, this concept of  the universe having a rock fundamental mineral manifestation which becomes  a vehicle for spirit through  the unfolding of evolution and so forth, and all of this just being a process of consciousness manifesting itself as it returns to itself. I found the traditional [academic] explanations did not capture the non-dual dynamic.

This is why Daoist alchemy is very interesting, because this double nature is very clear in Daoist alchemy: specifically, the whole idea of yin and yang, where every facet of reality can be expressed in terms of a yin-yang dynamic. In a basic sense yin is more material and yang is more spiritual, but it is always a dance, they are never ultimately separate.

And if you look at Chinese medicine, they’ve got the biological physiology but they also have the energetic physiology. So you have the veins where the blood flows but you also have the meridians through which  the chi flows, and they would say the blood follows the chi, so there is always this interaction or dance of the two aspects. And if you extend this to reality as a whole our world is very much this way, we have this materialistic universe that we cannot deny, but that itself follows this invisible or energetic universe which pulses through it like the chi pulses through our meridians in close contact with the blood in our veins and so forth. To me that seems a much richer model of the relationship of spirit and matter than the dualistic polarization where they don’t even communicate.

The cosmos as the stage of divine self-perception

You can take this idea back to Egyptian cosmology where humankind is seen as a mirror of the divine being and the cosmos itself. The Corpus Hermeticum says that there are two forms of God: cosmos and man. So the cosmos and the human being are two symbolical images of divinity. So the cosmos has an intelligence or soul –what they call the Anima Mundi or World Soul– just as the human being has one.

Egyptian cosmology says this almost directly, that the universe itself, the physical world or the material cosmos is the body of the Divine Mind and in a sense all things mirror that form, creation itself is a replication or extension of this original mode of divinity.

The other implication here is that our mind or soul is really ultimately identical with the Divine Mind and this is something that gets expressed classically in Hinduism with the idea that Atman is Brahman, the personal soul is the universal soul.

But this themes come up: that you are not separated from ultimate reality, you are an expression and vehicle of it just as much as the cosmos is.